What Is Biohazard Cleaning and Why Does It Matter 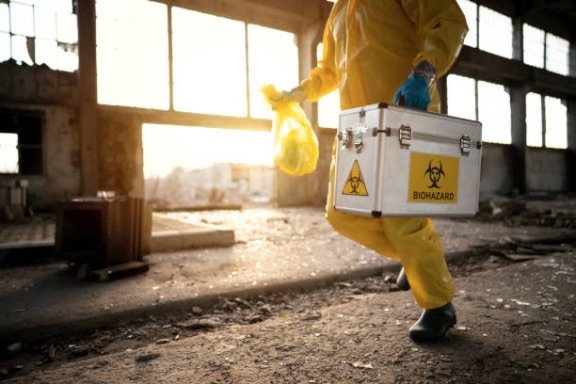 What is biohazard cleaning?

Who can work in a biohazard cleanup?

What is biohazard cleaning?


A biohazard is any organism or waste material that poses a health hazard to humans and other living things. So, biohazard cleaning involves disinfecting, decontaminating, and completely eliminating all these hazardous materials from the environment. Unlike the standard business or house cleaning, biohazard cleaning requires the use of specialised equipment, industry expertise, and appropriate certifications. Doing it wrong or improperly poses health and safety risks to everyone involved.

This involves decontaminating a scene where a loved one passed on, which is mostly in their homes. These kinds of scenes are contaminated with bodily fluids and other biohazardous materials that attract pathogens, posing a significant health risk to anyone who is exposed. Cleaning such scenes may sound like standard cleaning, but in actuality, it is the removal, disinfection, and cleaning of the hazardous scene and materials, utilising industry-standard chemicals and equipment, and not forgetting quality training on how to clean up. Therefore, this kind of cleanup is better off left to experienced professionals who are properly trained, equipped, certified, and licensed.

A crime scene always contains biohazardous materials, especially if the crime was violent. Other than forensic residue and maybe tear gas residue, crime scenes are contaminated with blood and other bodily fluids, which all present health hazards to anyone nearby. Crime scene cleanup ensures that all these biohazards are completely eliminated once all the investigations are done. Some of the incidents that require this type of cleanup include accidents, suicide, homicides, mass trauma, vandalism removal, as well as industrial accidents.


In biohazard cleaning, there are different terms that are utilised when identifying the various stages in the cleanup process. These stages are:

This is the first step in every biohazard cleanup process, where the contaminated area is contained and the removal of the hazardous materials is undertaken. When you come across a hazardous scene or area, it is recommended that you self-contain on your own, by removing yourself from the scene safely to avoid cross-contamination. Then you need to call for help from biohazard cleaners to come and take care of the area. If the site is left for long, it becomes a breeding ground for pathogens and microorganisms, which pose a significant health risk to anyone who gets exposed.

What the cleaners do is try and prevent the microorganism from spreading into the surrounding areas and they also try to clean up and eliminate all the dangerous and contaminated materials from the scene.

After the containment and cleanup, then disinfection and sanitisation are what follow in biohazard remediation. Just the cleanup alone doesn’t eliminate all the pathogens, and given that they are invisible, chances are that they are still lurking in the residue. So, sanitisation and disinfection ensure that all the pathogens are completely eradicated. Using industrial-standard chemicals and disinfectants, you are able to fully and safely eliminate the hazardous organisms from the contaminated scene.

The next stage in any biohazard cleaning is deodorisation. After the cleanup and the sanitisation processes, there are persistent, pungent, and pervasive odours that are left at the biohazard scene. This is particularly the case after cleaning up an unattended scene or a hoarding site. In this stage, cleaners utilise high-grade deodorisation chemicals that leave the environment smelling refreshed.

The most crucial and ultimate goal of any biohazard cleanup is to render the premises or scene fully habitable and usable. The cleanup ensures that all contaminants or any other hazardous material that would otherwise present an enormous health challenge to humans are eliminated, leaving the premises hazard-free and hygienic for people to live in.


According to Health and Safety at Work Act 1974 and the Control of Substances Hazardous to Health Regulations 2002, employers have a legal duty to protect the health and safety of their employees and anyone else that may be on the premises. Whenever an accident or death occurs, blood is always present, and therefore the risk of being exposed to blood-borne pathogens and other biohazards such as MRSA and hepatitis is always there. Due to all these potential hazards, biohazard remediation comes in handy so as to protect the health and well-being of everyone involved. Following the Health and Safety Executive (HSE) Standards, which includes equipping every cleaner with protective gear and also practicing universal precautions, biohazard cleaning minimises the risk of cross-contamination and ensures that the contaminated scenes pose no single threat, health-wise, to people living in the surroundings.

When biohazard scenes are not treated or cleaned properly, they can easily lead to further health risks, which include outbreaks, as well as property damage. What’s more, standard cleaning such scenes is not at all effective. At best, this kind of cleaning merely suppresses the pathogens and bacteria; and at its worst, you miss some hidden section with blood or other bodily fluids. This triggers the likely return of awful odours and the growth of additional colonies of bacteria. Proper biohazard remediation mitigates all these concerns though.

Moreover, in the occurrence of a crime in a particular building, oftentimes is when the owner wonders on the next course of action would be. These kinds of scenes are first taken over by the authorities for forensic investigations. And since you need the premises to be cleaned and disinfected, and all the blood and other bodily fluids eliminated, without obstructing the investigation, you just call biohazard cleaning company to come and take care of everything. Obstruction of Justice is a crime. Therefore, biohazard cleaning guarantees the avoidance of any form of obstruction since professional biohazard cleaners know how to coordinate with the investigators and know what they need to do until the scene is released for cleaning.

After a crime, and after the investigators are done with their work, a lot of residue and bodily fluids are left behind, and if they are not cleaned as soon as possible, they could result in further damage to the property. For instance, blood and bodily fluids are absorbed into the carpeting, wood, and drywall, and if not promptly cleaned up, they could remain hidden, thereby allowing the proliferation of some toxic black mould. With professional biohazard cleaning, all these could be avoided. No one would ever want such kind of structural damage to their property, and that’s why biohazard remediation would be of great help to you.

The more we continue to learn about the risks of blood-borne pathogens and all the other illnesses that are triggered by biohazards, the more we realise and understand the real importance of biohazard remediation, as well as those who undertake these remediation tasks. The fact that these pathogens are fatal to humans should be reason enough for people to take biohazard cleaning seriously. That way, they are able to prevent outbreaks or illnesses among those who live and work in the neighbourhood.

Who can work in a biohazard cleanup?


Biohazard cleaning doesn’t require any specific education, work experience, or certification, and it is often believed that just about anyone can work as a cleaner in biohazard scenes. But what some people fail to understand is the fact that biohazard cleaning isn’t meant for everyone.

The fact is, biohazard cleanup is a stressful and demanding profession, requiring you to work for longer periods and come across tragic circumstances. Also, biohazard cleaning isn’t the same as janitorial services or standard cleaning or even maybe your CSI’s favourite episode. If you assume so, be sure that you will be in for a big surprise when you find out that all those assumptions are misguided.

Biohazard cleaners need to be determined and tolerable to all kinds of circumstances. It is a lot of work, and therefore, the commitment will also be key. Luckily enough, there are enough biohazard cleaning companies out there. All you will have to do is to look closely!